As a Captain I've found, and don't think I'm alone here, that when it comes to making decisions on which teammate to play when against who, I've got a whole checklist I go mentally go through. So many people think that your handicap indicates exactly how each player plays. I wish it were so cut and dry, but it's not. (At least not on my team).
Do I think that strong "2's" can almost always beat weaker "3's" and your "8" is a guaranteed win? Nope, because at the end of the day two numbers are not playing, two people are playing.
I've noticed the better Captains of winning teams know people, specifically their own people. One facet of knowing your people is that part you recognize involving alcohol. Some people play better after relaxing after a beer, some play better after extreme relaxing (i.e. a bucket of beers) and some can't hold a stick after a glass of wine.
But do you, the player, know yourself? If you drink during League Night, what is your perceived playing ability? Do you have pool "beer goggles" on top of the same ol' regular"beer goggles"? Check out this nifty chart I found and see where you measure up! 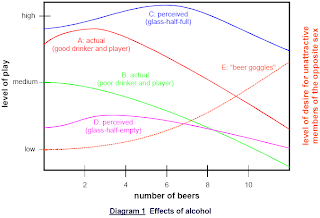 Diagram 1 shows the effects of alcohol on both one’s actual level of play and one’s perceived level of play. Also shown is the "beer goggle" curve that illustrates the level of desire for unattractive members of the opposite sex. The horizontal scale on the graph represents the number of beers consumed. If you prefer wine, mixed drinks, or hard liquor instead, the scale will be more compressed (i.e., the effects happen faster).

Curve "A" (the red curve) shows how level of play might actually vary for a typical good player who is not new to drinking. The level of play is fairly good to begin with. As the person drinks 2-3 beers, he or she might actually start playing a little better because the beers might help relax the person (alcohol is a depressant after all), resulting in less tension and a smoother, more accurate stroke. However, as the number of beers is increased, the actual level of play decreases significantly as the level of intoxication increases. Obviously, the shape of this curve and how fast and far it drops will vary from one person to the next. Some people also might not benefit at all from the relaxing affects of the alcohol.

Curve "B" (the green curve) shows one such example. This player is not very good to begin with ... his or her sober level of play is just "medium." Alcohol only makes things worse ... the level of play decreases even with the first beer, getting worse with subsequent beers, especially when alcohol is involved. Inebriation can make some people delusional and affect their judgment.

Curves "C" (blue) and "D" (magenta) show examples of two such people. The curve "C" person is delusional even before the first beer ... his or her perceived level of play is actually higher than his or her actual level of play. This only gets worse with more alcohol ... up to a point (about 6 beers). I call the curve "C" person a "glass-half-full" player, because he or she has an optimistic view of their level of play. As the drop in the curve shows, even an optimistic person with false confidence will eventually realize when their level of play has degraded to a really low level. I call the curve "D" person a "glass-half-empty" player because he or she doesn’t perceive a high level of play to begin with, and the perception goes up only as the level of play goes up (as with curve "A"). Alcohol doesn’t seem to have much effect on the pessimistic curve "D" player’s perception of their actual play (i.e., the curve is fairly horizontal).

Curve "E" (orange) shows an entirely different effect called the "beer goggle effect." I’m sure many people have either direct experience with, or have observed, this effect in action. When you drink too much, your judgment is not as good concerning what you think is attractive or not. With intoxication, and as the night grows later, your level of desire for less-than-attractive members of the opposite sex (or same sex, depending on your orientation) will generally increase. Most people also become less inhibited with alcohol, so they are more likely to "seek" partners, sometimes with uncharacteristic bravado. This might be analogous to a drunken player’s go-for-it attitude and belief that he or she can sink any shot on the table. Before anybody accuses me of being sexists, I want to be clear that these effects apply equally well to both genders. Women can get the same false perceptions and "beer goggles" just like men do.

I will admit to having played with "C"s and am myself a "D".