I think I've found the oldest pool hall in Charlotte run by some of the oldest pool players in Charlotte. No, really. (The two owners probably have a combined age of over 150.)
Ever heard of Pass Time Billiards on Central Ave? I didn't think so. Or, for those of you that have heard of it, ever been inside? Didn't think so. I ventured in the other day, even though I've been told that it's the type of place that isn't really "league orientated", but was pleasantly surprised. (I do think this may have been true in the 90's, but no longer seems to be the case.)
When I did walk in, the hallway with the giant mirror threw me off, I'll admit that. But then I turned the corner where I encountered a handful of silver-haired men pretty much lounging around talking shop with each other. They got very quiet upon seeing me, I guess I wasn't the average looking customer, but were polite and listened to my explanation about 8 Ball Express and our teams in the area.
As I spoke I gazed around the room and saw 8 VERY carefully kept tables, 3-9fts, 2-8fts and 2 bar boxes. The tables looked a bit dinged and possibly original to the building (27 years old) but the rails were firm and the cloth was new. They also have a wonderful 10ft American Snooker table with tight rounded pockets and were mildly surprised that I a)knew the dimensions and b)asked if they played Golf on it after noticing the regulation balls. (Go me!)
The location itself is reminiscent of a scene from "The Color of Money"; large, somewhat dark and bare, with a great original Ms. Pac Man game and an old school jukebox. The walls were covered with all types of great old posters, fliers and boxing match advertisements. I got the impression that it was the type of place, opening at 11am, where a person could go and quietly spend an afternoon, practicing without much disturbance or interruption. Of, if you were looking to see some very high quality playing to help elevate your game, you could find it there.
The place has been there over 27 years and has seen the Plaza-Midwood area cycle from bustling and new, to old and neglected and now to hip and trendy. 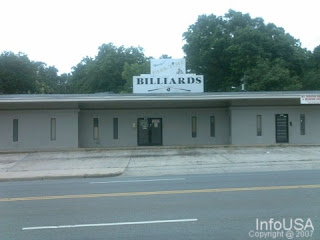 The guys wanted me to let people know Pass Time does currently host league matches and is open to having 8 Ball Express teams. If you are interested just let them know!
The two co-owners are wonderful, friendly, and full of stories of the ever changing billiard scene of Charlotte and the surrounding area. Go check them out sometime for a bit of this town's history that, judging from the kind lines on their faces, may not be around forever.
Posted by Dawn at 7/16/2009 06:00:00 AM

back when I was a little girl that used to be a slot car racing place. They had these tracks that ran all over the room and you bought or made your cars from old kits. My dad took me one night to watch them race. Haven't been in there for over .. years.

Awesome Alice, thanks for sharing!