Wow, Engineering At It's Fugliest! 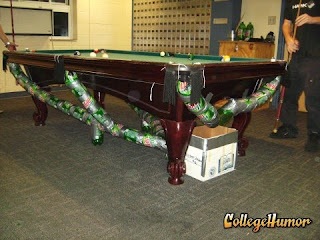 This formation of a ball return system out of Mountain Dew 2 liters bottles reminds me of people's efforts to manipulate the scoring system.
The people that built this must have spent a great deal of time and effort cutting the bottles, taping them together, making sure the angels were right and the balls could make it down the tunnels and into the box. All that time, effort and man hours spent doing something they think would make the game easier INSTEAD of playing the game of pool, which, when you own a pool table, is what it is supposed to be for.
Also, at the end of the day, they still have to bend over and take the balls out of the box, two or three at a time, which is a probably harder than the two players simply walking around half the pool table and pulling the balls out of the pockets closest to them. Oh yeah, and it's ugly as hell too.