Help Me Help You!

I recently ran into two handicap complaints (not counting the over ranked guy from previous post) and would like to remind everyone that, when it comes to "laying down" or "sandbagging", 9 times out of 10 people can only do that if you let them. So, let's focus on how you may be duped, so we can put a stop to it and make you none the wiser. 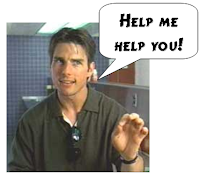 Example #1 (True story)
Team Captain
: "So and so is just banging balls around and laying down. He is really a 6 but is ranked a 4. He had two break and runs and is a much better player. We play against him in an in-house division and I know his skill set."
Me: "How many non-performance/defensive shots did you mark on that last game that went on for a while?"
Team Captain: "Um...two?!?"
Me: "Um, well, yeah...I'm gonna have to say it was at least three, more like five. "Help me help you!

Example #2 (True Story)
Team #1 never pays attention when it comes to keeping score, always asks the other team how many innings they got and what balls were left on the table and, "Hey, I gotta go to the bathroom/bar/jukebox so can you keep score for me?" Team #2 gladly agrees. Now I'm not saying teams will take advantage of this situation, and for the most part teams will be honest, but if Team #1 sounds amazingly like your team and people you play against all of a sudden seem very underanked, well...um..." Help me help you!

If your team's scoresheets don't tell the complete picture of what actually happened during a match, the score system can never work properly. As much as I would really like to, I wish I did just know everyone's true playing ability. But until time travel is possible, I simply can't be at every match watching every player, hence the need for scoresheets and those pesky columns and boxes to be filled out.
Just don't forget the whole system is based on your team's input, which (hopefully) your team captain/last player left/D.D. signs off on as correct at the end of the night.

And I'm trying not speaking from a soapbox here, anyone who plays my team knows I am not always a model scorekeeper myself (all of my Thursday CLT Travel 9-Ball division will vouch for it). If you do keep score properly and still feel something is amiss, the next step is to fill out a complaint form and the issue will be addressed within 24-48 hours. (Find one here: http://www.8ballexpress.com/national/uploads/ComplaintForm.pdf ) I honestly do value your feedback and concerns about handicaps and really do listen, but geniunely feel most of them could be alleviated with proper scorekeeping.
The system is there and ready, people just have to use it!
Posted by Dawn at 2/16/2009 12:55:00 AM